WE HELP COMPANIES TO GROW IN AFRICA

A SYSTEM TO IMPROVE CITIZENS' SAFETY

You are in: News » News » IDC delegation at National Day of Kenya at Expo Milano 2015

IDC delegation at National Day of Kenya at Expo Milano 2015

"Tuesday, September 8 has been the National Day of Kenya at Expo Milano 2015. Uhuru Kenyatta, President of the Republic of Kenya has attending. A series of events scheduled from September 9 to 12, including the long-awaited Kenya Expo Run

On Tuesday, September 8, 2015 Expo Milano 2015 celebrated the National Day of Kenya. The Kenya Pavilion welcomed Uhuru Kenyatta, President of the Republic, who visited the Country’s Pavilion

"I am here to tell you that Kenya is a small country of unlimited possibilities," said Kenya's president Uhuru Kenyatta.
"Not just tea and coffee, not just trade and tourism but also agriculture and information technology," continued the son of Kenya's founding father Jomo Kenyatta. "Kenya aims to be a middle-income country by 2030," the president added. "Africa's political, economic and social reawakening is a crucial aim for feeding the planet," said Italian Justice Minister Andrea Orlando.
In this respect Kenya is set to become an advanced point of reference "needed by the whole world", he added.

the General Commissioner Ruth Mwaniki and the Ministry for East African Affairs, Trade and Tourism Phyllis Kandie, they were part of the Kenya delegation, while for the Italian side was present Giuseppe Sala, Deputy Commissioner of the Government for Expo Milano 2015.

Were present for San Marino Repubblic: Quinto Protti and Fabrizio Cardillo, Members of the IDC delegation. They met mr. Kenyatta during the visit at Milano Expo and during the Gala Dinner"

The day's program
The ceremony - that took place at 10:30 am at the Expo Centre – has been preceded by a cultural performance of the Sauti Sol group welcoming the arrival of the delegation of Kenya. During the flag-raising ceremony, the choir Voci Bianche from Novara played the national anthems.

After the official speeches and a short cultural performance, the celebration started on the Decumano, with a parade by the traditional group Bomas and the children's choir has led the official delegation to the Kenya Pavilion, in the Coffee Cluster.

At 11.35, at the Kenya Pavilion, there was a guided tour of the Pavilion, with cultural and entertainment activities. It was also possible to taste local products and the famous Kenyan coffee.

The delegation then moved to Palazzo Italia for an official lunch and to sign the Book of honor, followed by a visit to the pavilions of Angola, the United Arab Emirates and Germany. Dances and songs by the group Bomas continued in the afternoon, at the Conference Centre.

The Kenya week, from September 9 to 12, with a Marathon on September 10
After the official ceremony, a press conference at the Expo Centre at 11.05 with the presence of Giuseppe Sala, Sole Commissioner for the Government for Expo Milano 2015 to introduce the cultural program planned by Kenya for the following days.
In fact, during the Kenya Week the country will animate the Exhibition Site with two shows a day, morning and afternoon, at the Coffee Cluster of music and folk dances performed by the groups Maasai and Bomas's.
But the central moment of this week is the Kenya Expo Run, the first Marathon in a World Exposition, scheduled on September 10, from 16.00 to 22.00 h.
The 3-kilometer "Family Run" will leave at 16.00 while the 10-kilometer competition race. 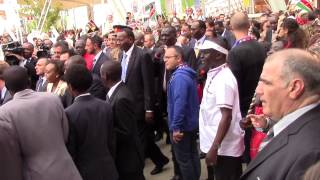